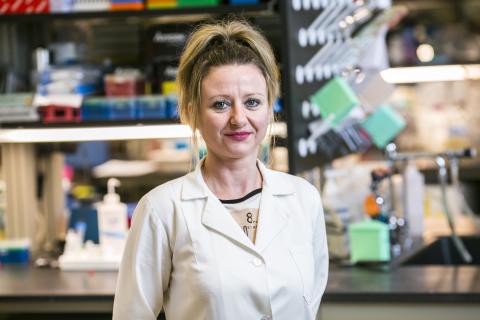 “I do not practice clinical medicine but I know when you treat a disease, there is success and loss. The most important ways to succeed incorporate innovative treatment, experienced professionals, a comfortable environment and the desire to improve yourself. At TISCH MSRCNY, I am surrounded by these key elements every day while I practice medical science."

Valentina joined Tisch MSRCNY in April, 2014 as a member of the Regenerative Medicine Research Team, driven by her desire to see how medical science can be translated to the clinical application (in particular the clinical use) of cell therapy products. Her work at the Center is dedicated to the FDA-Approved Stem Cell Clinical Trial.

Valentina received her Masters of Science in Biotechnology from Sofia University, Bulgaria with a concentration in Genetic and Cellular Engineering. She began her research career in 2003 as a Molecular Biologist in Bulgarian Academy of Sciences, Institute of Molecular Biology, where she was utilizing cutting-edge molecular and cell biology techniques for cell isolation, culturing, and cloning with proven understanding of gene regulatory mechanisms and DNA replication, repair, damage response and chromatin modifications. In 2009, Valentina moved to Albert Einstein College of Medicine, NY and facilitated the research of liver progenitor and mesenchymal cell fate; traced and characterized liver stem cell niche. In addition, she studied kinetics of liver regeneration response following radiation, and stem cell activation. Two years later she joined NYU Fertility Center/Langone Medical Center and conducted research to establish stable human embryonic stem cell (hESCs) lines from fresh and frozen human embryos for the National Institutes of Health registry. She has devoted her research to characterized histochemical and genetical approaches of hESCs in terms of marker gene and protein expression profile, growth rate, differentiation potential, and genetic status.

In the Tisch MS Research Lab, her major responsibilities include maintenance of human donor-derived mesenchymal stem cell and neural stem cell cultures, media and reagent preparation, quality testing and in-vitro stem cell differentiation assays in the manufacturing of cell therapy products for use in clinical research protocols by following cGMP requirements and SOPs.