Repair the Damage with Stem Cells

There is an unmet need to develop therapies aimed at prevention or reversal of progression-related disability in MS. Therapies for progressive MS must overcome the varied aspects of disease pathology such as inflammatory demyelination, neurodegeneration, and astrogliosis (sclerosis, or scar formation). Since 2001, Dr. Sadiq has directed the center’s research efforts to investigate the use of stem cells as a repair strategy for progressive MS. Stem cells are unspecialized cells that have the ability to regenerate damaged tissue.

Since 2004, Dr. Violaine Harris and her research team have been investigating a population of adult stem cells from bone marrow called mesenchymal stem cell-derived neural progenitors (MSC-NPs) as a source of stem cells to promote repair and regeneration in progressive MS. MSC-NP cells have a number of properties that make them suitable as a cell transplantation therapy for MS:

1. MSC-NP cells are autologous, meaning they are derived from a patient’s own bone marrow. Autologous cells are recognized as ‘self’ and are thus not rejected by the body after transplantation.

2. The neural characteristics of MSC-NP cells are associated with a reduced potential for mesodermal differentiation making them more appropriate for transplantation into the brain (Harris et al 2012)

3. MSC-NP cells are capable of promoting repair in the brain and spinal cord by the release of specific proteins that modulate the immune response and encourage existing brain progenitor cells to mature and remyelinate (Harris et al 2012)

In 2012, Dr. Harris and Dr. Sadiq published a proof-of-concept study demonstrating the efficacy of MSC-NP transplantation in the EAE mouse model of MS (Harris et al 2012). The study found that multiple doses of MSC-NPs were necessary to reduce disease in the mice. Importantly, they showed that intrathecal delivery of the MSC-NP cells directly into the spinal fluid was a feasible and effective route of administration. The mechanisms involved in MSC-NP-mediated repair included creation of a tolerant CNS milieu as well as induction of resident host stem cell progenitors to differentiate. The research is now focused on understanding the mechanisms of MSC-NP-mediated repair. Dr. Harris and her team are utilizing in vitro and in vivo models to better understand the ability of MSC-NPs to affect immunomodulatory (modulation of specific immune responses) and trophic (promotion of mature brain cell types) mechanisms of repair. The research has identified a panel of candidate growth factors and small extracellular vesicles (EVs) as mediators of the reparative response.

In a pilot clinical study, Dr. Sadiq and Dr. Harris reported the results of the first-ever MSC-NP cell transplantation in 6 patients with severe progressive MS (Harris et al 2016). An average follow-up of 7 years demonstrated both short and long-term safety of the treatment. Four of the six patients showed a measurable clinical improvement following MSC-NP treatment, specifically with regard to mobility and bladder function. The data obtained from this pilot study confirmed the safety and tolerability of this approach, and informed the design of the Phase I clinical trial in terms of dosing and dosing frequency.

In 2013, the FDA approved the investigational new drug (IND) application to conduct an open-label Phase I clinical trial to test the safety and tolerability of intrathecal transplantation of autologous MSC-NP cells in 20 patients with progressive MS. Treatment in the first trial patient started in April 2014. Each of the 20 patients were administered 3 separate doses of up to 10 million MSC-NPs spaced 3 months apart. This is the only clinical trial of its kind in the United States to test freshly harvested MSC-NP cells administered intrathecally in a multiple dosing regimen (Harris and Sadiq 2015). In addition to safety outcomes, study patients were monitored for disability status (EDSS), muscle strength, walking speed, bladder function, and MRI. The most common minor adverse event included a headache and sometimes fever during the first 24 hours following the treatment, which was otherwise found to be safe and well-tolerated. Of the 20 study subjects, 15 (or 75%) demonstrated functional neurological improvement measured 3 months after the third treatment. The improvements associated with IT-MSC-NP treatment were evident within a group of MS patients who had an otherwise stable disability for the year prior to the study. The results of the Phase I trial can be seen here.

The encouraging safety and efficacy results from the phase I trial led the FDA and IRB to approve a larger Phase II placebo-controlled study to confirm efficacy of intrathecal MSC-NP treatment in patients with MS. A Phase II study is designed to study efficacy of a treatment by comparing to a placebo control. The Phase II study is double-blinded, meaning neither the patient nor the assessing neurologist knows whether or not the patient got a stem cell treatment or placebo. The study has a crossover design, meaning that study patients who received placebo in the first year will crossover into the MSC-NP treatment group in the second year (and vice versa). Fifty MS patients are expected to participate in this trial, and enrollment has begun. All announcements regarding the Phase II study will be made on this website.

Due to the groundbreaking advancements being made with MSC-NP-based cell therapy in MS, our study required an increased capacity to manufacture the cells. Tisch MSRCNY is now the proud home of a Regenerative Medicine Laboratory, which includes a state-of-the-art cGMP cell production facility. 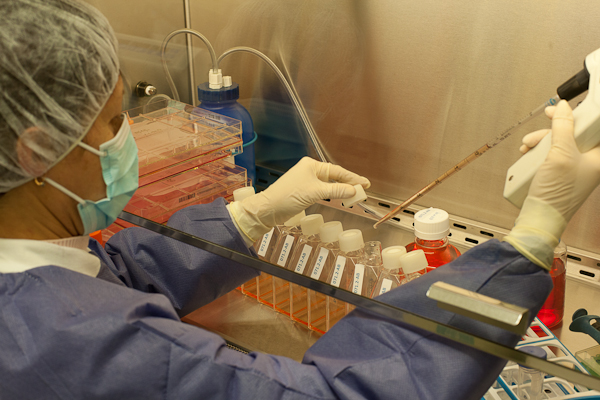